My new book – ReGrace: What the Shocking Beliefs of the Great Christians Can Teach Us Today – is now available.

You can download the first five chapters for free. Just read what follows.

Here is the Table of Contents:

Acknowledgments 195
Notes: A Word to Scholars 197

The church is tired of seeing Christians act ungraciously toward one another when they disagree. Social media has added to the carnage. Christians routinely block each other on Facebook because of doctrinal disagreements. The world watches the blood-letting, and the Christian witness is tarnished.

But what if every Christian discovered that their favorite teacher in church history had blind spots and held to some false–and even shocking–views?

Bestselling author Frank Viola argues that this simple awareness will soften Christians when they interact with each other in the face of theological disagreements.

In ReGrace, he uncovers some of the shocking beliefs held by faith giants like C.S. Lewis, Luther, Calvin, Moody, Spurgeon, Wesley, Graham, and Augustine–not to downgrade or dismiss them, but to show that even “the greats” in church history didn’t get everything right.

Knowing that the heroes of our faith sometimes got it wrong will empower us to treat our fellow Christians with grace rather than disdain whenever we disagree over theology. 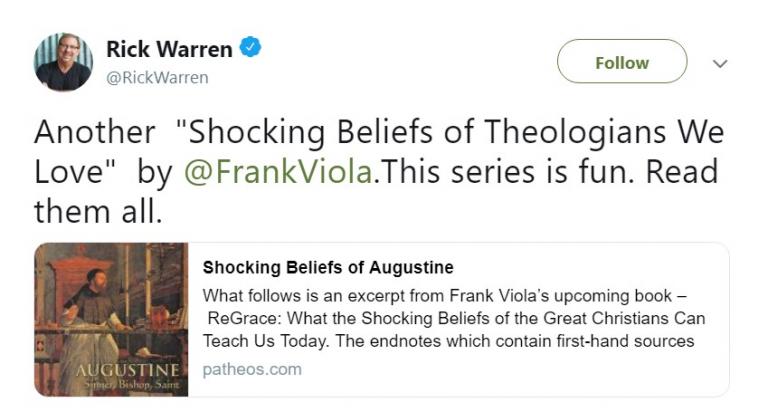 In November 2014, Rick Warren asked me to write a series of blog posts on the shocking beliefs of the great Christians who shaped the church (especially the evangelical wing).*

*While I claim the term evangelical myself, because it best fits my theological views, I don’t stay within my corner of evangelicalism when it comes to reading the writings of others. I also believe that modern evangelicalism has a number of blind spots, something I’ve addressed on my blog—frankviola.org.

Warren’s hope was that the series would “soften” the uncivil climate in the Christian community over doctrinal differences.

If, for example, a Christian discovered that his or her theological “hero” had some peculiar, inaccurate, or even shocking belief(s), this would give him or her pause before unloading both barrels on a fellow believer over an alleged doctrinal trespass.

After watching the nonstop carnage on social media over theological disagreements during the last decade, I fully resonated with Warren’s goal. And so I began writing the “shocking beliefs” series on my blog.

Within a year, the series went viral, receiving hundreds of thousands of pageviews from all over the world.

In 2017, the Baker publishing team took the edited and expanded blog posts, along with new chapters I had written, and turned them into a full-length book that released in 2019.

Rick has been kind to recommend it to his network of churches all over the world as well as to his ministry team of 400 leaders.

The Purpose of This Book

The book I wrote before the one you’re reading right now is called Insurgence: Reclaiming the Gospel of the Kingdom—which is a fresh presentation of the earth-shaking gospel of the kingdom of God.*

*Frank Viola, Insurgence: Reclaiming the Gospel of the Kingdom (Grand Rapids: Baker, 2017). Many have called Insurgence my “signature work.”

One of the lessons those of us who have joined the Insurgence have learned is to always walk in the love of Christ, even toward people with whom we disagree.

And the Lord’s servant must not be quarrelsome but must be kind to everyone, able to teach, not resentful. (2 Timothy 2:24)

ReGrace has but one objective: to foster grace, civility, and tolerance among Christians when they disagree with one another over theological matters.

The subtitle “shocking” is subjective. Some Christians will find a number of the beliefs articulated in this book to be first-class shockers. Others will find them surprising. A small number may shrug their shoulders and muse to themselves, “So what?”

Yet the point made in each chapter is undeniable. No influential Christian of the past could claim flawless perception. Each of them had blind spots. Some of their views were peculiar at best. Others were aberrant or ran contrary to Scripture, at least to the minds of many evangelical Christians.

But despite their less-than-perfect beliefs, God still used them.

This fact alone should cause us to relax whenever we run into a teacher, preacher, author, or fellow Christian on a blog or social media feed who holds views with which we disagree.

Especially when we come to grips with the immovable fact that none of us is immune to being wrong.

That includes you and me.

Before we move on, I want to be crystal clear about five things:

1) There’s no reason to get offended with any of the chapters in this book. Unless of course, you’re easily offended. (If that’s the case, I have no guaranteed antidote for you, but I did address you directly in a previous book with a cure.)†

2) Most Christians have heroes. I know I do. But some people are overly protective of theirs. I was keenly aware of this when I wrote the blog post on the “Shocking Beliefs of John Calvin.” After I published it, I sent this email to Rick Warren:

Subject: Shocking Beliefs of John Calvin (this one may get me hung!)

Hi Rick. The post is below. If I disappear, it’s your fault!

You can reach me at Salman Rushdie’s place. 😉

Rick’s response made me laugh out loud. He promised to officiate my funeral if my body was ever found!

Keep in mind that I’m not a “Calvin-hater.” I never touched his theological system. I simply pointed out some beliefs he held that are shocking to many evangelical Christians, just as I did with the rest of the people I treat in this volume.

Nevertheless, in response to that original blog post, I was on the receiving end of hate mail. Even from Quakers!

The smoldering anger laden in those emails would make Keyser Söze blush. (If you don’t know who Mr. Söze is, you can insert Howard Stern into that sentence.)

What do I mean? Here are two of the tamer ones (cough):

Viola’s journey to the dark side is now complete. Writing this blog post is the equivalent of witchcraft. I wonder if he’s stopped torturing small animals too. Doubt it. Take me off his blog list immediately.

Your “shocking beliefs” series reminds me of Charles Manson. You’re a [expletive] and probably a closet serial killer too!

3) Some of the so-called shocking beliefs that I cover in this book are beliefs that I myself agree with. Others I find abhorrent. Consequently, just because a shocking belief is listed doesn’t reveal how I personally feel about it. It simply means that many evangelical Christians will find the belief to be shocking (at worst) or peculiar (at best).

Therefore, to those of you who are inclined to finish this book and proudly throw your chest out saying, “Good grief, I wasn’t shocked by any of those beliefs!” remember three things: You missed the point of the book; each person I feature had people who believed they were heretics during their day; and every one of them still have people raking them over the coals because of their viewpoints.

4) While I disagree with a number of beliefs that each person I feature held, I have respect for each of them. In fact, I cannot tie the laces of their shoes. Each individual was remarkable in his own right. I realize this means that people who don’t like Calvin, Lewis, Wesley, Augustine, and so forth will be turned off by that statement. And some may misuse this book as a frontal attack on each person it covers, completely missing the boat on those chapters and the intent of this volume.

If you ever find someone doing that, feel free to quote this paragraph to them to jar their memory.

5) To keep this book relatively short, I didn’t cover every shocking belief these figures from church history held.

I simply covered the beliefs I felt were sufficient to make my point. The source materials will give you further information about each individual and their views. So I’m sure you can uncover more of their shocking beliefs, if you desire to investigate. But again, how many peculiar views they held isn’t the point. The point is that some of their beliefs were imperfect, and hence, we should show

more tolerance toward each other whenever we disagree.

For the both of you who are apoplectic right now because I used the word “great” to describe fallen humans, let me point out that I’m merely following Jesus here (emphasis mine):

The greatest among you will be your servant. (Matthew 23:11)

Truly I tell you, among those born of women there has not risen anyone greater than John the Baptist; yet whoever is least in the kingdom of heaven is greater than he. (Matthew 11:11)

Whoever practices and teaches these commands will be called great in the kingdom of heaven. (Matthew 5:19)

So settle down, okay?

Note that I’m only covering eight “great Christians” in this book. In my study of church history, these are the people I believe shaped the evangelical Christian world the most. I don’t have a “shocking belief” entry for Billy Graham since I don’t think he fits into that category. However, I did feature seven surprising (perhaps even shocking) quotes by him.

You will find that no women are featured. That’s because in my research, the women who significantly shaped church history (such as Fanny Crosby and Amy Carmichael) didn’t appear to hold to any shocking beliefs.*

*Carmichael dressed like the Indian women she ministered to and allegedly kidnapped children who were being sold as sex slaves (in an effort to rescue them). She also didn’t accept donations. But none of these beliefs would be shocking or surprising to a twenty-first- century Christian audience.

I suppose that’s a compliment to them.

Finally, I’ve deliberately omitted the shocking actions of the great Christians, focusing instead on their beliefs (actions and beliefs aren’t the same).

It bears repeating: the purpose of this book is not to lower these individuals in your eyes. It’s actually the opposite. It’s to show you that despite their strange (and sometimes flawed) thinking on some issues, God still used them. Mightily, even.

The lesson, of course, is that God uses His people in spite of their strange or erroneous perspectives. And since that’s the case, let’s have more grace whenever we disagree with one another.

It’s time for us to regrace.†

†By regrace, I simply mean rethinking and rediscovery God’s grace in relation to those with whom we disagree. In other words, to begin to be gracious toward all our fellow sisters and brothers in Christ, especially when we don’t see eye to eye.

Listen to this podcast episode where Frank answers questions about false teachers, heresy, and other topics related to “regracing” from three popular interviewers. Just click the image below to listen. 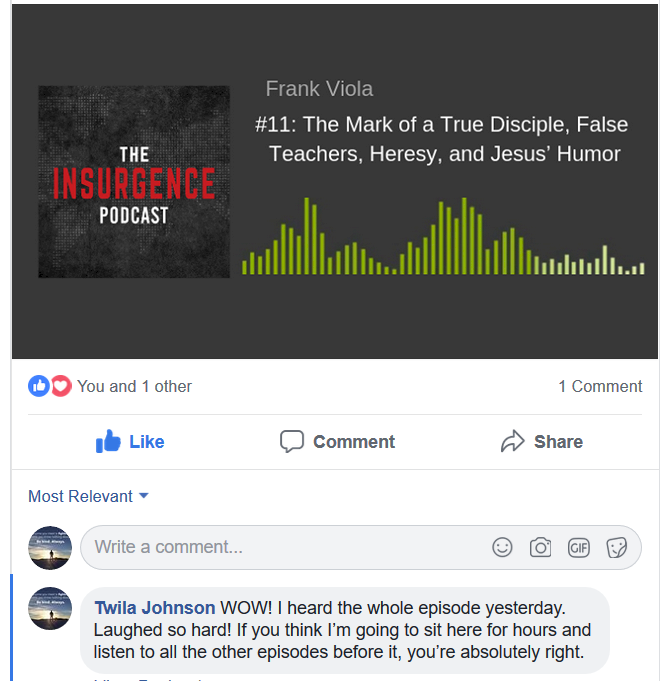